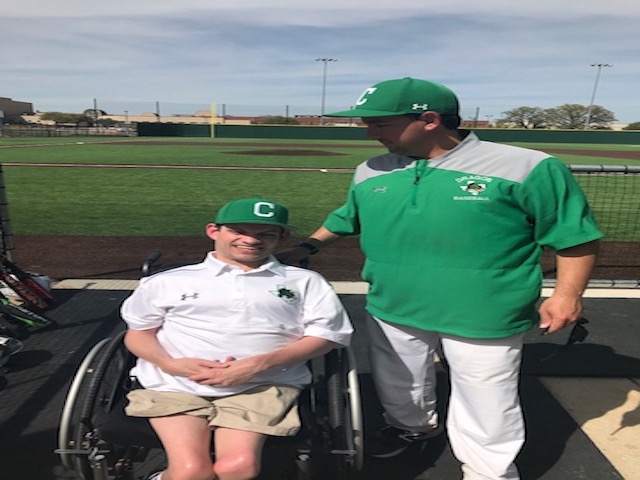 Stories are often picked up around the yard. Such was the case today when Dragon Assistant Coach Zach Sellers shared a great one with me before the Dragon/Wakeland non district baseball game today.

Coach Sellers once had the honor of working for Wakeland's head coach when he was a young assistant just breaking into the profession. So who else would you schedule when looking for a Saturday game but one of your mentors? Sometimes great plans have a hiccup though. While Wakeland was taking infield today, their head coach was injured when struck by a ball put in play by his own team. Needless to say Coach Seller's mentor, Coach Rose, missed the start of the game. Pity for him too because Wakeland started the game really well, answering an SLC run in the 1st with three of their own to take an ever so brief 3-1 lead. Until the 4th - when the SLC offense countered with eight to blow the game wide open.

Cade Bell went 4-5 on the day while Cole Johnson and Jack McBride each had a pair of RBIs. The win on the mound went to Cutter Sippel who tossed his first complete game on the year while picking up his second win to improve to 2-0.

Dragon Baseball is now 16-3 overall and due to a schedule change now has a very truncated week with games Monday, Thursday and Saturday. Monday, March 26th the Dragons host Lewisville at 7pm for a return to district games.