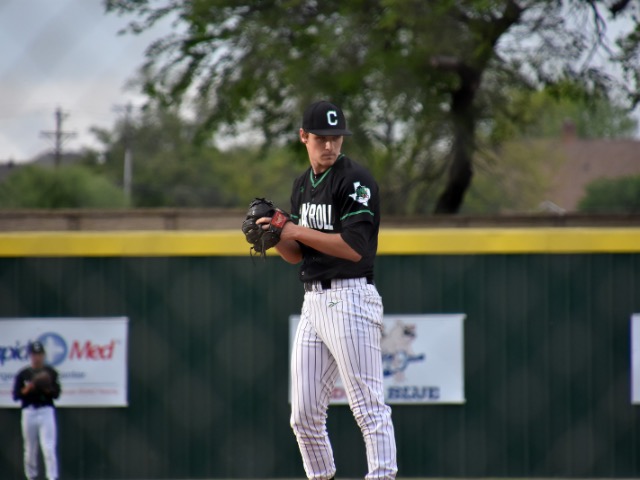 The Dragons, 21-5, continued to show their amazing depth as SLC, 9-1 in district play, maintained a one game lead in 5-6A.

Carroll had eight hits on the night and though they failed to get the clutch hit to separate from the Bobcats from Byron Nelson, it didn't matter because tonight as they have been so many other times in 2018 the Dragons were powered by Cole. Nicco Cole that is - who picked up his 6th win on the year while his loss column remains spotless. The 6-0 mark leads the team in wins and his ERA fell to .640.

Cole probably had his best stuff since the season's opening day. For those of you who don't remember he threw a perfecto to begin the year. Tonight the Dragons scored a single run in the first inning on an RBI by Cade Bell and turned the proceedings over to Cole who made it stand up with a shutout victory. He gave up just three hits while striking out eight in a very efficient 78 pitches in the complete game victory.

Let's take a moment to recognize just how great the Dragon pitching staff was in this series. The offense scored only four runs in two games and it didn't matter a whit because the pitching staff gave up just a single run over the same 14 innings. This in a series which first place in 5-6A hung in the balance entering the week.

The same thing will be the case this week when the Dragons take on the now 2nd place Blue Raiders of LD Bell in a series beginning Tuesday night, April 17th at Dragon Field. First pitch of the most important home game of the year so far begins at 7pm.