DRAGONS SWEEP AWAY PLANO'S WILDCATS WITH EASE WITH 7-3 WIN 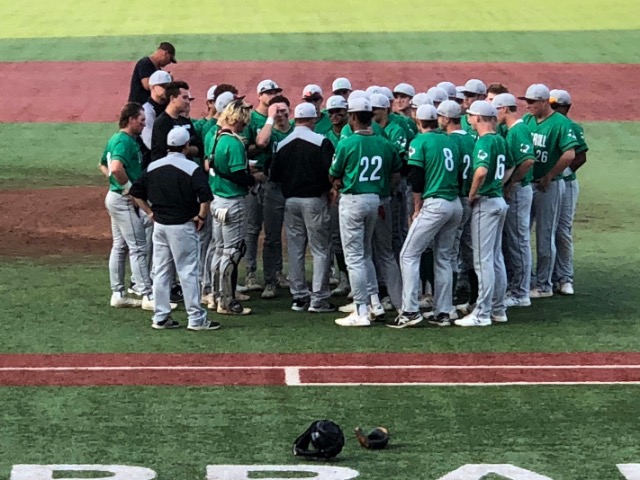 Unlike game one of the bi-district playoff series vs. Plano, game two actually had a bit of playoff drama, for all of l/2 inning.

After leaping out to a 4-0 lead the Dragons saw a feisty effort from the Wildcats plate three runs and cut the lead to 4-3. No problem. Asked to respond like the defending Region 1 champions that they are, SLC plated three more runs to re-extend their lead to 7-3 and salt the game away.

Nobody wants to play on Saturday in the playoffs if you can help it and now Carroll, 26-6, is headed to the area round to face either Copperas Cove or Irving MacArthur. Cove leads the series one game to none.

The win on the mound went to Nicco Cole who picked up his 8th victory on the season to improve to 8-0 overall. He tossed 6 2/3 innings and only the newly formed UIL pitch count limit of 110 stopped him from throwing a complete game. Cole threw a 112 pitches while striking out 8.

It is the second consecutive year that the Dragons have eliminated the Wildcats in the first round although '17's version was a much more dramatic three game series.

Game two was broken open in the strangest possible way. In a pitcher's dual earlier in the ballgame, SLC loaded the bases on three straight walks in the 3rd inning. Then Cole Johnson delivered an RBI single which kept the bases loaded and nobody out. With Carroll up 1-0, and bases loaded Nik Millsap grounds out to score one run, placing runners on 2nd and 3rd. Every the aggressive one, second year head man Larry Vucan called for a squeeze bunt by senior Will Quillen. The ball never made it past the pitcher and it didn't matter. The pitcher bobbled the ball and then with no play at the plate rushed his throw to first allowing 2 runs to score. Staked to a 4 run lead Nicco Cole and Carroll cruised to the finish and into round two.