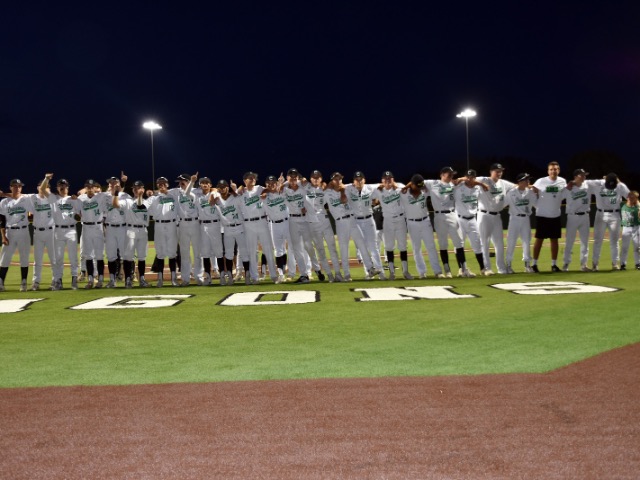 Dragon Magic! Some say it doesn't exist - that there is no more oil left in that lamp. But if you watched the first five innings of tonight's Region 1 Semi-final at Jesuit College Prep Wright Field and then saw the final two innings of the game - you believe.

For the first five innings of tonight's series opener vs. the Timber Creek Falcons, Carroll was stymied in a way they have not been all year. Trailing 3-0 and seeing themselves out hit 8-2 thru five, you can forgive fans if they were planning on a 14 inning game tomorrow. But then came the 6th inning. With 2 outs and nobody on the Falcons were four teeny-tiny outs away from taking a 1-0 series lead. Then came an innocent infield single, then a bloop that found the turf. Suddenly the tying run was at the plate with two outs and Will Quillen at the plate. He singled, scoring Cole Johnson and the playoffs were on again. Trailing now by a pair the Dragon offense got some help on two Timber Creek errors. The last of which knotted the game up scoring pinch runner Marcus Hill. This sent the series opener into the final inning knotted at 3 apiece. The Dragons would go on to plate two more in the 7th, the first of which came on a wild pitch scoring pinch runner Jaxon Osterberg. And stunningly the Dragons had come from planning for two games in the hot sun to a game one lead. The offense would add another insurance run for the 5-3 final.

Who would pick up the win on the mound? Why Bergen Krug, of course, whose last win before tonight came in the pre-season. Krug improved to 3-0 on the year by tossing 2 2/3 innings of hitless baseball before Adam Stephenson picked up the game's final three outs for his second save.

Carroll, 30-6, now needs one win over the course of tomorrow to advance to the Region 1 finals. First pitch at Dallas Jesuit at 4:30pm.