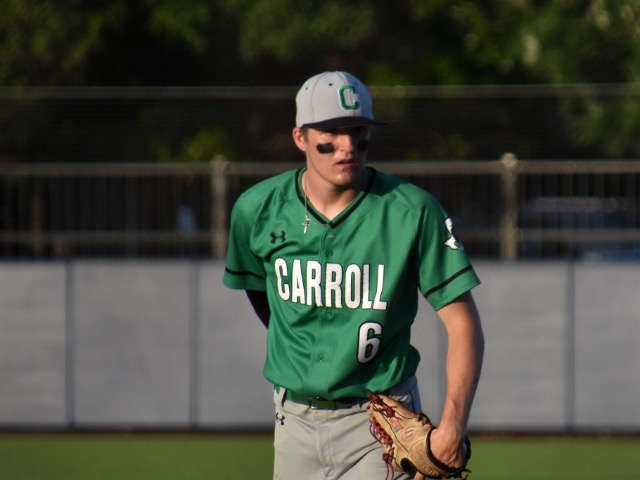 If I had told you a pitcher in the Region 1 final threw a one hit complete game and one team won 6-0 you might think it was the pitcher bound for the SEC. Nope.

Kyle Warden, a pitcher who in February didn't figure to be one of the top pitcher's in Carroll's rotation, stonewalled the Marauders in the Region 1 final opening game at Globe Life Park. In the place of every metroplex baseball player's dream, Warden, who graduated last night, had the game of his life. He struck out eight over 7 innings on just 86 pitches. He allowed just one measly little infield single late in the game on what had previously been a perfect night. The only other Marcus baserunner was erased on a caught stealing by catcher Matty Werner. Warden picked up his seventh win against only one defeat which places him second on the pitching staff in wins.

This game looked like it was going to be the kind of pitching dual seldom seen at Globe Life Park, or Ranger's ballpark, or The Ballpark in Arlington. The game was just a 1-0 Carroll lead until the home half of the 4th when the Dragons, 32-6, used six consecutive singles to plate four runs and break the game wide open. Although this is not the kind of offensive attack usually seen at The Ballpark, balls are usually flying over fences and setting off fireworks, the singles deluge proved to be one of Carroll's most effective offensive outings of the season.

SLC pounded out eleven hits off of the A&M committed Blake Mayfield. Cade Bell, Adam Stephenson and Jake Miller all had two hits on the night. Bell reached base three times and had three stolen bases.

The Dragons look to pull the sweep train back out of the station tomorrow when the series continues with game 2 beginning at 8pm at Globe Life.