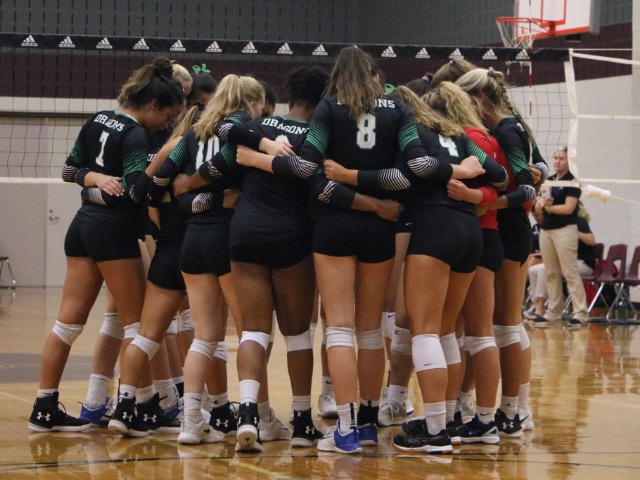 Following their first loss of the season Lady Dragon Volleyball had a very early wakeup, as in a 9:15 first serve, against San Antonio powerhouse Smithson Valley. The Lady Dragons rolled over the Lady Rangers in two sets, winning, 25-11 and 25-22. In this match the team looked every bit the team that Greg Riddle of the Dallas Morning News gave the pre-season state title to.

The high level of play continued later in the day as the ladies won their 4th consecutive set of the morning, sweeping away San Antonio Brandies 25-22 and 25-14. After the two sweeps the team got a lunch break and moved to a new facility, but the time off their feet resulted in a half step back as the team was swept for the first time this season by El Paso Coronado, 12-25 and 23-25.

The nine match week caught up with the ladies in their final game in Pearland. Some prospective, however, the team finished 10th out of 88 teams and was one set away from earning a berth in the gold bracket and a trip to the semi-finals. Senior setter Kenzie Nichols was named to the John Turner Classic All-Tournament Team.

Your Lady Dragons are growing together as a new journey begins. And they do not have to wait long for the next shot at victory as SLC, 7-2, will host perennial 4A state title contender Lovejoy at the Dragon Den on Tuesday , August 14th at 6:30pm.