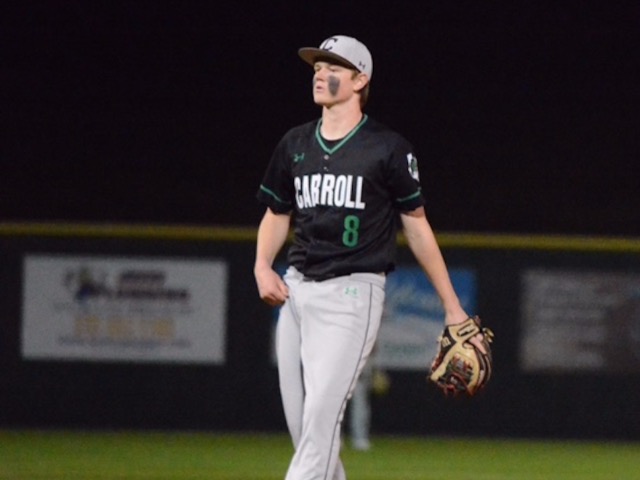 Carroll Dragon Baseball 2019 is like that old line from the Wizard of Oz - pay no attention to the overall record behind the curtain. Despite a pre-season mark of 12-10 overall, which saw the team play everybody but the Texas Rangers, the Dragons keep plugging away in 5-6A. And for the third straight week they have opened a district series by knocking off a fellow undefeated team.

Tonight's victory came over Byron Nelson on the road. The game began according to script for the Dragons when they loaded the bases on three straight walks. Justin Grech bounced into a double play, plating the game's first run. Though Carroll would only score one in the first, the offensive explosion came the next inning. After placing men on second and third, with nobody out, Head Coach Larry Vucan, always aggressive with men on base, called for a suicide squeeze, which worked out better than even he could have planned. The shocked Nelson pitcher fumbled the ball, allowing Carroll to receive an extra base runner. Nelson then gifted the Dragons another run on a wild pitch and with senior Cutter Sippel on the mound, who is beginning to pitch like he did as a sophomore, the game was done.

Sippel, 4-1, pitched six innings while striking out seven and walking just one Bobcat. He scattered five hits in the 5-2 victory and sophomore Ryan Pehrson continued his ace relief work out of the bullpen, pitching a spotless 7th.

SLC, 13-10 and 5-0 in district play stays in 1st place and looks to finish off their third consecutive district sweep when they take on Nelson at home on Friday, March 29 at 7:30pm.