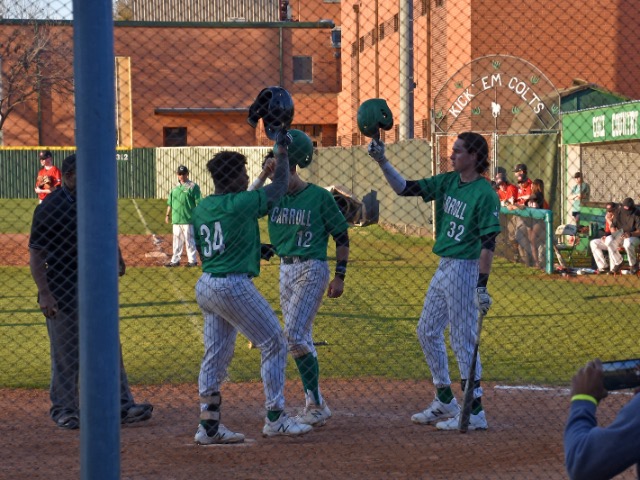 After a day's delay, Carroll finally got the Tyde Classic underway by defeating Colleyville Heritage 4-1 in the opening act of the tournament. The game was tight throughout. Carroll plated 2 runs in 4th in what prior to then had been a tight pitcher's dual. The Dragon rally was sparked by a Will Quillen double. After an error advanced runners to 1st and 3rd, Larry Vucan dipped into his bag of tricks and asked Marcus Hill to lay down a squeeze play. Presto! The Dragons were on the board. SLC would add another run in the inning on an RBI single.

Heritage's lone threat would come in the top of the 5th. They would load the bases with nobody out. Following a bases loaded walk, the Dragon coaching staff went to the bullpen and called on burgeoning closer Bergen Krug who stepped around a major Colleyville Heritage threat, getting two soft pop ups and a strike out to avert further damage.

Yanluis Ortiz would cap the day with his first varsity homer in the top of the 5th. The two run shot would give SLC the final margin of 4-1. The win went to Kyle Warden who improved to 2-0.

Carroll had no rest before starting game two against the host Colts from Arlington. The Dragons would have to put their come from behind shoes on in the nightcap. Cutter Sippel drew the start but ran into early trouble. Arlington scored 2 runs immediately to jump out to a 2-0 lead. Sippel would finish the 1st but last just two-thirds of an inning more before being relieved by Grant Golomb who earned the victory to improve to 1-1. Carroll would trail 2-0 until the 4th when they would plate an unearned run to cut the lead in half. The SLC machine wouldn't really get going until the 5th inning when they used a series of hits to get on track. In this situation several singles are as good as a long ball including an RBI single by Jake Miller who led the SLC attack going 2-4. When all the dust was settled Carroll would plate 4 runs to lead 5-2 after 5 innings. Arlington would battle back with 2 more runs in the 7th before Charlie Kiefer would earn his first save, cleaning up the 5-4 victory.

Up next SLC has a split double header, first beginning with an afternoon game which is currently underway and then returning to SLC for their first ever home game on their new turf field of dreams tonight at 7:30pm vs. Burleson Centennial.