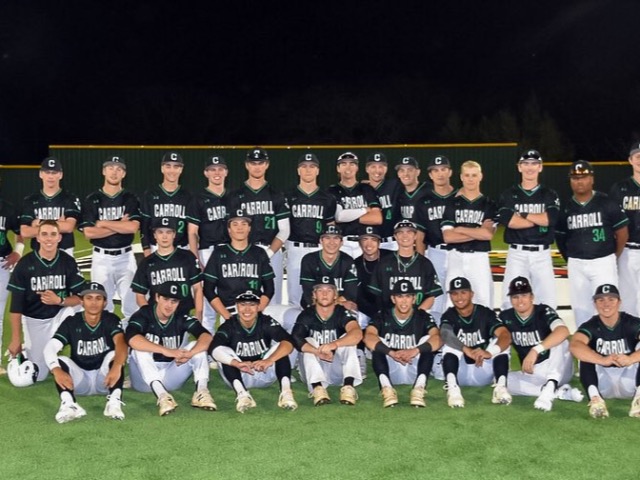 In a place that resembles Boston's Fenway Park, because of its high out field walls, Dragon Baseball played a Fenway Park style slugfest to open up day 3 of the Highland Park tournament. This was Saturday's version of where in the world are the Carroll Dragons.

Batting as the visiting team in the top half of the first inning vs. Sachse, Carroll's offense erupted scoring seven runs. The monster inning began routinely enough when Jaxon Osterberg reached on a bunt single. Jake Miller strode to the plate in the 2 hole and launched the ball over Prosper's 19 foot high outfield wall for his first career HomeRun!! Carroll's offense was far from done in the inning. After Yanluis Ortiz reached on an error and was courtesy ran for by Luke Slahor, Jake McBride singled, then Kyle Warden singled scoring Slahor. Why are writing in such great detail about the first inning of a 14 inning doubleheader? Because the Dragon offense would end up needing every bit of these runs as Sachse would have an offensive day as well. Cal Furgal drew the start for the Dragons but on a day when the wind was blowing out he would have his struggles, pitching 2 innings while allowing 6 runs before yielding to Cade Manning in relief. Manning would survive to pick up his first win and Yanluis Ortiz would pick up his first save in an 11-10 back and forth doney-brook of a baseball game.

And that was only the first of two in a very long day. The Dragons then had to turn around and face the home standing Eagles. Fortunately Senior Nicco Cole was there to settle the insanity. He pitched his second complete game of the year, allowing only 2 hits to the 5A powerhouse while striking out 9 Eagles while walking zero. The last of the 2 hits spoiled what would have been Cole's second shutout. For most pitchers this would be considered a career game, but when you are Nicco and you have already thrown a perfecto on the year, this is what you call another day at the office. Coach Vucan though called it a "masterful complete game performance."

The Dragon offense scored 4 runs in the first inning and put it on cruise control from there in a 6-1 victory.

Believe it or not there are only 17 regular season games left in Carroll's season. The final stretch begins on Tuesday night at home when the team takes on Flower Mound in their 5-6A opener at 7pm. The game will be live-streamed with our partners at Champion Sports Communication and don't forget about the Turf Tailgate fundraiser with MeatUAnywhere in the Baseball Parking Lot 5:30pm-7pm.