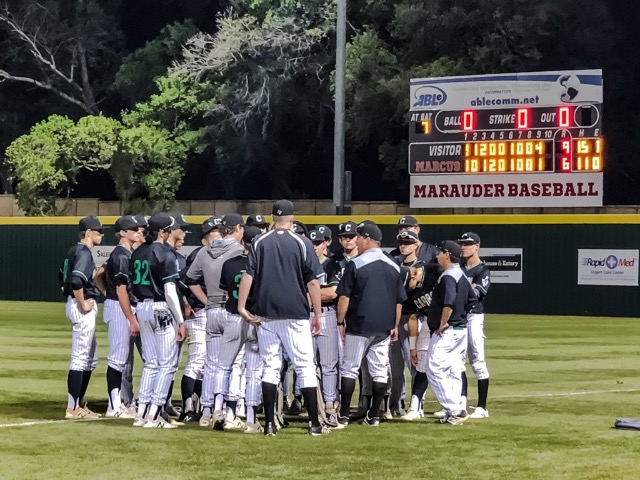 Number two state ranked Carroll, (19-5, 7-1) fresh off the longest "losing streak" of the season (all of two games) was something it has very rarely been this season - desperate for a win.

After Tuesday night's loss, this was a game that Carroll needed to stay in first place in district 5-6A. Normally a game that senior Nicco Cole starts is a lock, but factor in windy conditions in a very small ballpark and you get tonight's crazy 9-6 extra inning win.

The Dragons pounded out fifteen hits on the night and needed virtually every one of them to avoid being swept by the Marauders. This was despite Cade Bell starting off the game as well as you could with a lead off homer on the game's second pitch. Every time the Dragons took the lead Marcus had an answer until the 9th. At various points on this roller coaster the Dragons led 1-0, 4-1, 5-4 and 9-6.

Three Dragons had three hits on the night - Cole Johnson, Will Quillen and Nik Millsap all collected trey hits. The RBIs were led by Cade Bell and Will Quillen who opened the floodgates for the last time in the 9th, collecting the game winning RBI single in the final stanza.

The fortunate soul that survived all this offensive craziness on the mound was Adam Stephenson. He collected his 4th win on the year against zero defeats while striking out three.

Up next the Dragons travel to Nelson HS on Tuesday, April 10th at 7pm.