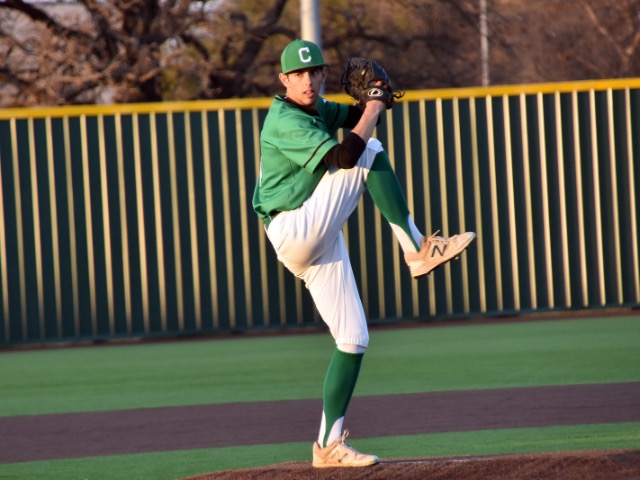 To paraphrase a popular baseball poem, "Oh, the outlook did look bleak" for your Carroll nine last night at Byron Nelson.

In a game that would have brought the Bobcats even with Carroll in the 5-6A standings, the Bobcat pitcher entered the 7th inning flirting with baseball history. The Bobcats had so far made one skinny run surrendered in the 4th stand up.

But sometimes the smallest spark can start the biggest rally. Carroll led the 7th inning with a hit-by-pitch and then a double placed runners on 2nd and 3rd. The Bobcat braintrust then made the decision to intentionally walk Marcus Hill to set up what they hoped would be the game ending double play. It was at that point that Nate Santiago delivered the biggest swing of Carroll's regular season, lacing a 3 run game winning double down the line, scoring Cade Bell, Nik Millsap and Hill.

Carroll had more runs in the game, three, than they did hits, two. And now they hold a commanding 2 game lead over Byron Nelson for the district top spot with five district games remaining.

Carroll, 20-5 was only in position to pick up their 8th district win because of the tremendous pitching of Adam Stephenson who scattered seven hits while tossing a complete game and striking out ten. With his 5th win he improved to 5-0 on the campaign which ties him for the team lead with fellow senior Nicco Cole.

The Nelson series continues at home on Friday, April 13th at 7pm.