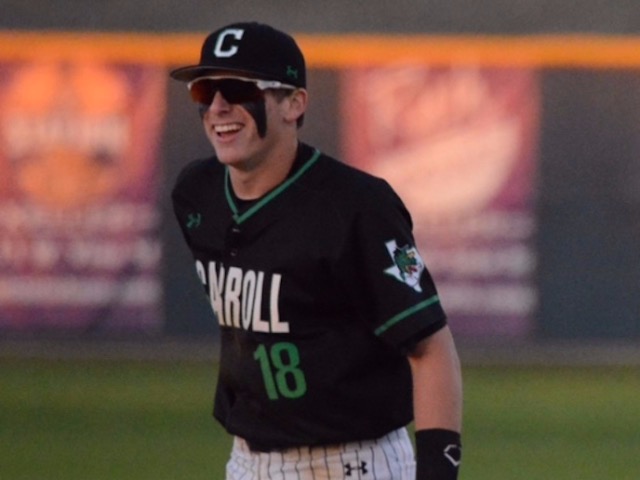 Just when you thought it couldn't get any crazier than a district opening extra inning win, in which the Dragons scored four runs in the 7th and 8th innings to turn a 6-3 deficit into a 7-6 win, Friday night's game happened.

The Dragons returned to their home field looking to sweep the Indians with their young Freshman pitcher Griffin Herring drawing the start. He did not record an out however, walking five Indians and surrendering five runs before being lifted for Sophomore Luke Gornell. Slowly the Dragon offense worked back in the game. The Dragons chipped away with one run in the first when Homer Bush was credited with a steal of home on a dropped third strike. The nearly one hour first inning set the tone for the craziness that would come. After a scoreless top of the second the Dragons answered back with four in the bottom half of inning number two, capped by a triple by Austin Hale to tie the game at 5-5 after two innings.

The Indians had missed their chance to turn the lights out on the Dragons. The game stayed knotted at 5 until - well of course - the bottom of the 5th when Junior Cade Manning delivered the game winning single, plating two and allowing the Dragons to cap a seven unanswered run comeback.

Luke Gornell, 2-2, had kept the Dragons in the game and suddenly he was in position to get a win. At this point skipper Larry Vucan dipped in to the Dragon bullpen for fellow Sophomore Ryan Pehrson. He was all warmed up and ready to to begin his work in the top of the 6th when the lights actually went out causing a 20 minute or so delay.

Power finally came back in the the 6th allowing the game to proceed. But if you thought the drama was over - not even close. Keller loaded the bases in the top of the 7th with only one out before a strikeout and an unbelievable running, leaping catch by Justin Grech ended the game and gave the Dragons their second district win in as many nights. Pehrson also earned his first save.

The Dragons, 10-9 overall and 2-0 in district, completed the regular season sweep of the Indians and will next face Denton Guyer on Tuesday, March 19th at home beginning at 7pm.