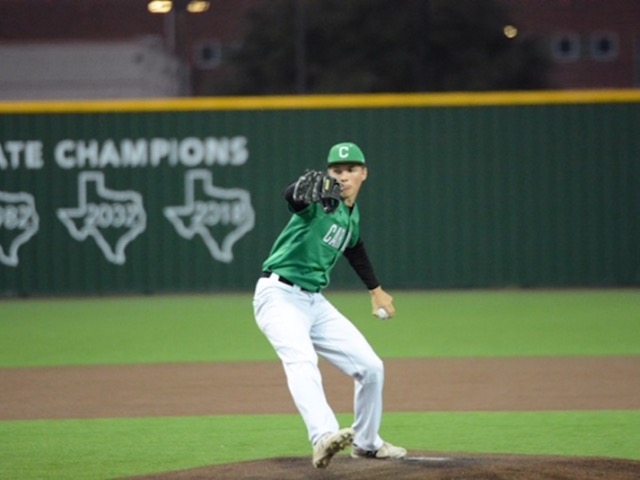 In pregame Carroll's starting lineup might have arched some eyebrows. The Dragon's cleanup hitter entered the game just hitting 1.67 on the year. But Head Coach Larry Vucan's track record of two state tournaments in two years speaks for itself and all Carroll's cleanup man, Jaxon Osterberg, did tonight was go 3-3 with 4 RBIs.

The Dragons separated the game vs Denton Guyer in the bottom half of the 1st inning. Following a 1-2-3 inning from Senior pitcher Cutter Sippel, 2-2, the Dragons, 11-9, put up a six pack of runs in the 1st inning. Lead off man Yanluis Ortiz began the game by legging out a lead off in-field single. The Dragon offense wasted little time scoring his courtesy runner and from there the match up with the also undefeated in district 5-6A Wildcats was essentially over. The Dragons won 9-2.

Osterberg was the offensive star of the night and Sippel got the win on the mound going 6 2/3 innings throwing over 100 pitches and striking out seven.

Up next for the undefeated in district play Dragons , 3-0, is the final game of the Guyer series on Friday, March 22 at 7:30pm at Guyer HS. They conclude their very busy week against Colleyville Heritage on Saturday, March 23 at 1pm.