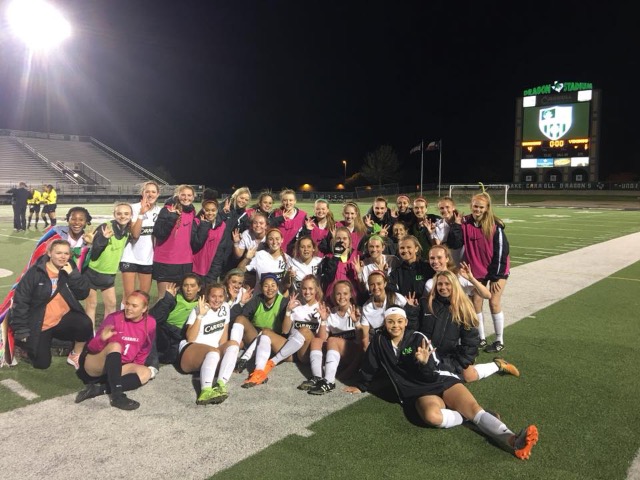 Irving Nimitz came into the game tonight in the Area round of the UIL girls Soccer playoffs as April's version of a March cinderella, fresh off crushing the playoff dreams of Waco Midway. It took all of thirteen minutes for the Lady Dragons to squelch Nimitz's further upset hopes.

Georgie Phelps blasted away for the game's first goal which was all the scoring in the first half. Leading 1-0 at home there seemed little doubt about the match's eventual outcome as the Lady Vikings had almost no offensive pressure in the first half, but as has been their playoff pattern the Lady Dragons added three in the 2nd half for good measure.

The first of the team's hat trick came on a goal by Tara Sumer with a nice pair of assists from the Lady Dragons. The next came midway through the second stanza with 13 minutes remaining in the match. The eventual Boomer Sooner Taylor Tufts got on the board before Sarah Hornyak closed out the scoring for SLC. Although Nimitz would add a very late goal to rob the Lady Dragons of a playoff shutout again, that matters not tonight. All that matters is that there is more soccer in the future of your Lady Dragons in a match up against Allen, most likely on Friday although that has not been officially determined yet.

SLC picked up their 20th win on the year to improve to 20-1-2 with the rather routine 4-1 victory. The playoff drama can wait for another match for tonight was clean and simple.