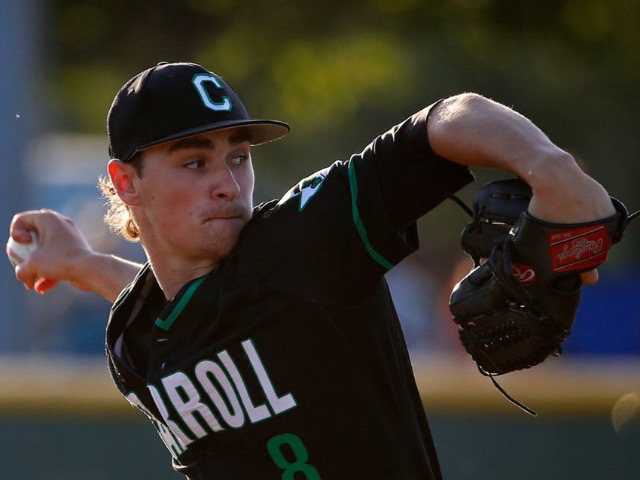 On paper this appeared to be the classic trap game for SLC's return trip to the state tournament to end early. A one game playoff on the road? Gasp - where are all the paper bags for all the Carroll fans to breath through? I mean anything can happen in a one game playoff, right? Except a funny thing happened once the game started. This dramatic setup was, well, stress free, because Nicco Cole was "just Nicco being Nicco."

Cole picked up his 9th win on the season while striking out 11 MacArthur Cardinals. Did he walk anybody? No!

The game was over before Cole took the mound, however, as the Carroll offense provided two runs in the top half of the 1st inning. Cade Bell slapped a single into left on the game's third pitch, stole second base, moved to third on a ground out and scored on a double by Cole Johnson, one of his 2 RBIs on the night. Johnson then scored on a strike out wild pitch . 2-0 SLC after l/2 inning and the senior Cole, who is committed to Howard College, said to the rest of his teammates, "thank you very much, I'll do the rest."

Carroll added two more runs throughout the course of the game and the Dragons, 27-6, cruised into next week's Quarterfinals. They will face either 5-6A district mate Byron Nelson or South Grand Prairie. Nelson currently leads the series 1-0.

The shutout was the second authored by Cole in as many playoff starts as he and Adam Stephenson combined for one in game 2 vs. Plano.