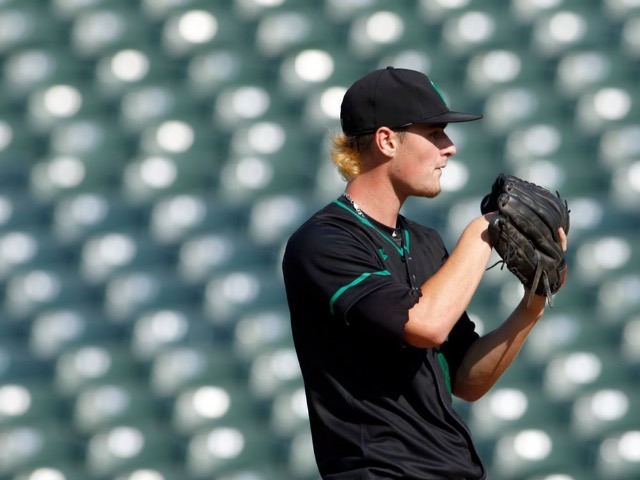 Nicco Cole had given up just two hits and befuddled a red hot Woodland's Highlander team for most of the day, and yet those 6th inning Round Rock demons were back. The ones who said "you're still in a 1-1 tie. Its the 6th inning. You remember what happened last year in the 6th." So how do you get the annoying Round Rock demon to disappear? On a team full of seniors who all remember last year's screeching halt of an ending to their 2017 season, it was one of the few starters who wasn't there last season who made sure that Carroll would be playing for one more day.

With a two ball, one strike count, sophomore shortstop Jorge Figueroa ripped a fastball to the left center field gap which took paint off of the 375 sign and scored Marcus Hill and Will Quillen who exercised a measure of revenge from his own 6th inning drama a season ago. Figueroa's double shifted the spotlight back to Cole who struck out batter #10 to put the Dragons one out away. And when a harmless ground ball found senior Cade Bell there was a 4pm date for this team tomorrow.

In what will likely be his final SLC appearance Nicco Cole capped a 13-0 senior campaign which may go down as the best single season by a pitcher in school history. These will likely be his final numbers of his final season in green and white. Record 13-0. Innings pitched 105.1 and ERA of .731 and on the first state finalist team since 2008. Not major leaguer Ross Stripling or first first round pick in school history Chance Caple or Trevor Tacker or Kyle Young can claim numbers like that. In a season where his year was so badly needed due to a pre-season injury to other members of the pitching staff, Cole answered the bell every time he was asked to. He will have his own page in the SLC baseball history books by the time it is over. Due to the one game playoff nature of the UIL State Tournament either senior Kyle Warden or senior Adam Stephenson will be charged with finishing this team's ultimate destiny. But all that matters right now is that for the first time in exactly a decade SLC baseball will be playing on the season's final day.

Carroll 34-6 now has a final's date with San Antonio Reagan at 4pm Saturday, June 9th. The game will air throughout the southwest live on FoxSportsSouthwest. Everybody has two options. Take southbound 35 and let a championship fill their soul or get in front of a television. But history beckons tomorrow.