BASEBALL RUNS OVER AND THROUGH REAGAN FOR THIRD STATE TITLE 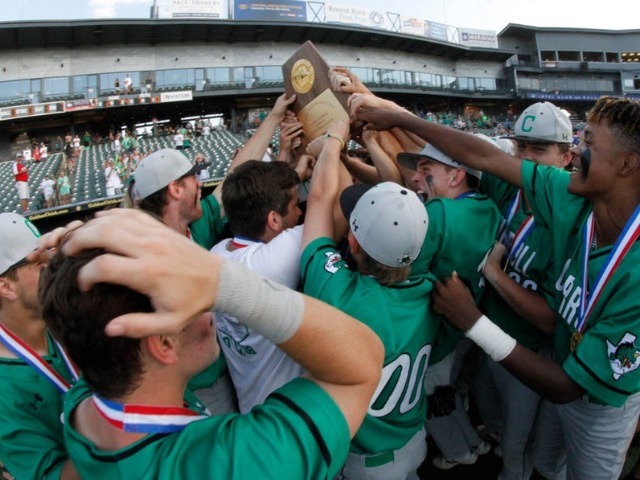 The 2018 UIL 6A State Championship game began with a seemingly routine grounder to third base until Cade Bell, Carroll's lead off man, met the San Antonio Reagan's first baseman. As the throw from third sailed high and carried the first baseman up the line and in the air, Bell lunged toward the bag. The former wide receiver met the first baseman like an all state linebacker. And though the out was recorded the game was on! And the defending Region 1 champions came for a bigger more important trophy. The one pictured above.

The next two Carroll hitters reached base and after the Rattlers recorded the second out of the inning Will Quillen stepped to the plate. He laced the ball toward the right center field gap, scoring both runners. Will used every bit of his speed to end up on third, giving the Dragons a 2-0 lead and the shell shocked Rattlers never recovered, thanks in large part to 6A finals MVP Kyle Warden, who kept Reagan off balance with his massive array of breaking stuff. He was flawless for 6 innings, holding Reagan to just six hits.

The fact that a Carroll Dragon team who reached Round Rock a year ago ended the school's 16 year baseball title drought wasn't that far fetched of an idea. But this 2018 season followed no one's script. Between the two starters who took the mound on this Round Rock weekend, Kyle Warden and Nicco Cole, combined to lose one game for the entire year going 21-1 as a playoff starting rotation. Today Warden worked his way out of two huge jams, one in the second with a fabulous catch by Quillen helping to strand the bases loaded and another in the third as Cade Bell stretched out for all his was worth to start a line drive double play. The win was Warden's 8th on the year to go with one defeat and the 7-2 victory was a comfortable as state title games get. And when closer Adam Stephenson came in from center field to strike out the final Rattler the Dragons had finally done what they had set out to do 365 days ago, end the 16 year title drought with the school's third baseball state championship.

Indeed this group will join the 1982 and 2002 teams on Carroll baseball's Mt. Rushmore. The 35th win will go down as the most memorable this season as Carroll finishes their title run with a 35-6 mark. They ended the year on a 14 game winning streak.

It was quite possibly the most remarkable year in Dragon Baseball history. Congratulations go to Larry Vucan, Chad Whitely an Zach Sellers. Thank you for a wonderful year on the diamond and thank you for Protecting The Tradition.