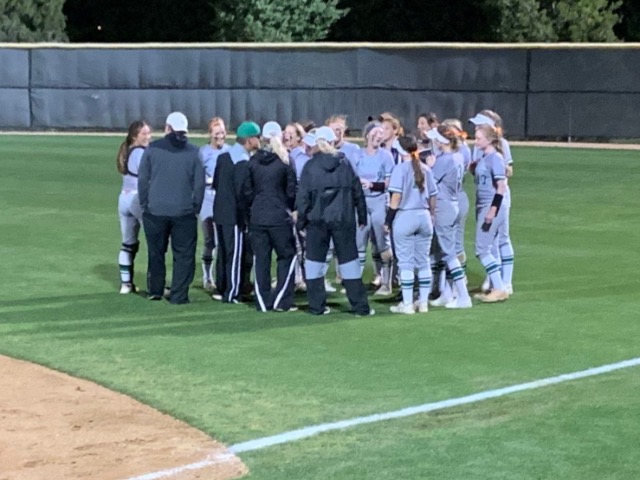 After dropping their first chance to clinch a playoff spot on Tuesday night, Lady Dragon Softball found themselves pushed into an unenviable position in their final regular season game. Win a road game against 5th place Timber Creek or be forced into a one game playoff on Tuesday, however tonight's victory over Timber Creek makes sure none of that is necessary.

Now the Lady Dragons are headed for the UIL playoffs with a 20-12 overall mark and their 7-7 district mark is essentially reset. With the 5-2 victory the Lady Dragons have just as much chance to be at the UIL state tournament in June as those who took top honors during the regular season.

This most critical win in the circle went to Kelly Shackelford who worked 5 innings while fanning 5 Falcons before yielding to Lauren Long who was spotless in 2 innings in picking up the save.

Offensively the Lady Dragons were led by Piper Harness with 3 RBIs out of the Lady Dragons' 4 on the evening. The Lady Dragons never trailed in the ballgame, striking for a run in the 1st on a double by Katie Gee. The Falcons would tie the game on a solo homer at the end of 1 inning and collect another solo homer on the night but as the old saying in softball goes - solo homers don't get you beat.

When it was all over and the dirt caused by the mid game rain shower had settled, the Lady Dragons lived to see another week together and are headed to the playoffs.

No word on an opponent yet - check back for those details later.

Congratulations Ladies - you're a playoff team.