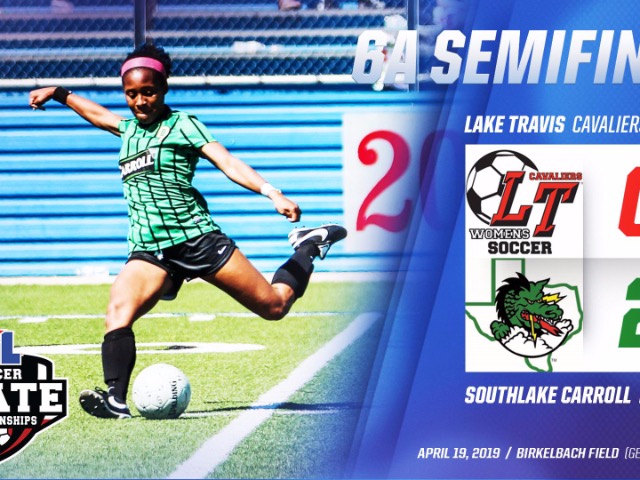 The Lady Dragons took a familiar pitch early this morning when they took on Lake Travis in the UIL State Semi-final. Remember the Lady Dragons play in the Governor's Cup tournament on Birkelbach Field every year in the preseason.

The 2-0 score line doesn't show how one sided this semi-final truly was. The Lady Dragons had more corner kicks - 14 - than Lake Travis was credited with shots on goal - 2.

The oddity of the game was that despite SLC's statical domination they only found the back of the net once in each half. The goal came off a corner by Madi Drenowatz in the first half, which resulted in her 31st goal of the year and a 1-0 lead at the break. The 31st goal now leads SLC, temporarily breaking a tie with Taylor Tufts who will enter the state final with 30 markers.

The wind turned in favor of SLC in the 2nd half but despite having the 15+ MPH at their backs, Lake Travis' defense remained stubborn until senior Sydney Nobles provided the one helper mid way through the game's final period. She played a beautiful cross off the right post and past the shoulder of the Lake Travis keeper.

Lady Dragon Soccer, 27-1-2 now awaits the winner of Allen/Katy Thompkins who are taking the field for pre game warm ups now. They will play for the State game Saturday, April 20th at 4pm..