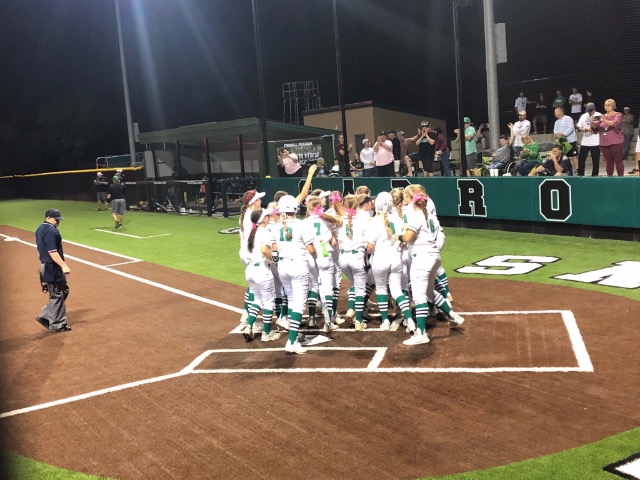 In perhaps what will go down as the craziest game in school history Lady Dragon Softball hung on through a 7 inning white knuckle, breath through a paper bag, game one of a bi-district series at Dragon Softball Complex.

The top half of the 1st saw the game unfold exactly like the "experts" would have expected as the District 6-6A Champions Flower Mound Jaguars leapt out to a 5 -0 lead before the Lady Dragons could record an out. The stunned home patrons had no reason to despair, however, because the wildness was just getting started. The Lady Dragons would send 17 ladies to the plate in the bottom of the first and 9 of them would score.

It started harmlessly enough with a lead off single but Gaby Garcia, who was hitting second, would start the game of her life by hitting a long 2-run shot toward centerfield to cut the deficit to 5-2. The parade of Lady Dragons would just keep marching to the plate as single after single, base runner after base runner would turn a 5 run deficit into a 4 run lead by the frame's end. At the end of the hour long 1st inning Lady Dragons lead 9-5. The 5-0 deficit from the first inning would ballon into a 6 run lead going into the top of the 7th thanks to some stellar relief pitching by senior Lauren Long and another 2 run homer by Garcia in the 5th.

When the night was over Garcia would have 3 hits and 5 RBIs which obviously lead the team's offensive output on the night. However Flower Mound wouldn't just take a blow-out and prepare for game two. Instead they stormed back with 5 runs in the top of the 7th to cut what was a seemingly comfortable 6 run advantage down to one. In fact the Jags put runners on every base in the top of the 7th and forced Long to rally back from a 2-0 count in a situation where two more balls could have meant extra innings or worse. The Jaguar fans were making so much noise it sounded like game seven of the World Series and nobody on either side could breath. Long worked the count back to 2-2 and then checked the runners and delivered the rise ball of her life which the Jaguars hitter swung at determined to hit a grand slam. No contact - ball game over. When all this craziness was done the Lady Dragons had a 1-0 lead in the best of three Bi-District series with their 13-12 victory.

Now they need only to split a double header at Flower Mound tomorrow to advance on to the Area round. The first chance for them to do so will come tomorrow at 6pm at Flower Mound Softball Complex.