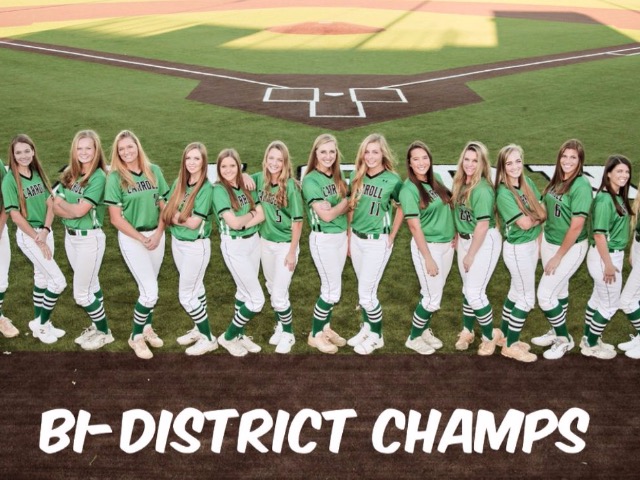 Lady Dragon Softball saw its season down to its last 12 strikes. What has turned into a very long day of softball began tonight at 6pm. The home standing Jaguars opened the day with a 12-3 victory to force an if necessary game and in the words of the very smart Forest Gump - that's all we have to say about that.

But a pregame coin flip before game 3 would prove to be key. Per UIL rules, even though Flower Mound was hosting, in the 3rd game a coin flip is required to determine the home team. On this night it went the way of the Lady Dragons.

Flower Mound struck first in the top half of the 1st but if you saw the opening game of this series you know the team that scores first meant - well nothing - in this series. The Lady Dragons immediately responded with 4 runs on 5 hits in the bottom half of the 1st inning, including a solo home run by Gaby Garcia. That home run thing will be revisited a lot in this game.

The Lady Dragons hit a season high 3 home runs in their biggest game of the season. One by Garcia, one by Lillian Cooper and one which we'll get back to.

The Lady Dragons managed to maintain their 1st inning lead all the way until the top of the 6th inning - thanks in part to a strong start by Allie Nuenke. She worked 4 innings of very nice work in the circle.

In the 6th inning, with 2 outs and nobody on, Flower Mound hit a seemingly harmless ground ball back to Carroll reliever Lauren Galbraith who picked up the ball and threw toward first. Her throw bounced away however, allowing a Flower Mound runner to reach base. A single and another error later and Flower Mound had retaken the lead and were suddenly 6 outs away from the area round.

The Lady Jags would retire the first two Lady Dragon hitters of the 6th inning but the Flower Mound coaching staff wanted nothing to do with Garcia, who as we mentioned before, homered three times over the course of the weekend. This earned her two consecutive intentional walks, following her 3rd home run. So with 2 outs and Garcia on first, Piper Harness strode to the plate. At this point the 6th inning and probably the season was on her bat. On a two strike, one ball delivery she swung and lifted a high arching fly ball toward right. Oh go - oh please go - thought every collective Dragon fan in the stands as they waited. And presto, suddenly, as the ball disappeared into the treetops the game was a 7-6 Carroll game again. The third lead change on the night.

But this series wasn't over. The Lady Dragons still had to get three defensive outs. The first two were routine enough but the Jaguars had one last gasp in them. On a one strike pitch they ripped a ball toward the same right field which resulted in a 2 out triple. Suddenly the tying run was just 60 feet away and the go ahead run was back at the plate. One pitch later - everybody could breath. A bouncing ball toward 2nd would finally end the series, some 6 hours after game two had begun and the Lady Dragons are headed to the Area round.

We will find out our opponent soon enough but that doesn't matter tonight. All that matters is there will be softball next week for the Lady Dragons as they are Bi-District Champs.

The win went to Lauren Galbraith in the circle, her first career victory on varsity as she is only a sophomore. She tossed 3 innings of nearly spotless relieve. The two runs she allowed were unearned. The Lady Dragons are now 22-13 and bound for the Area round.