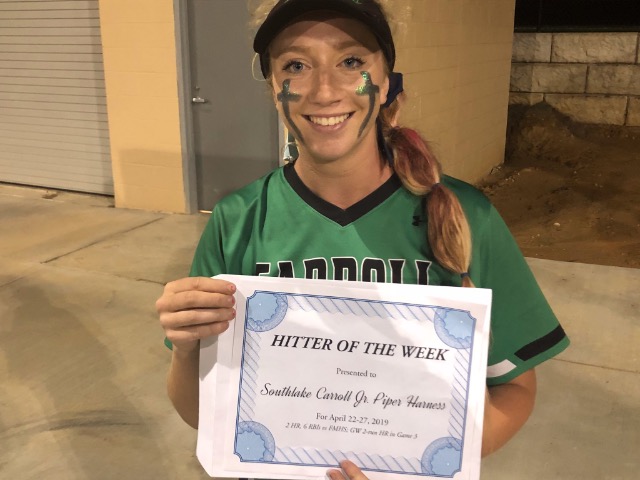 When the first pitch of a rain delayed game at Dragon Softball complex was deposited over the center field fence by Mansfield's lead off hitter, it seemed an ominous sign on what had been a eerie night. However, the momentum of the game was quickly turned when, as these young group of Lady Dragons have done so far in the playoffs, they would score 4 runs in the bottom half of the 1st inning.

Madison Cashon and Gaby Garcia lead off the home first with singles, worked their way into scoring position on a walk, and then following a strikeout by Katie Gee, Cashon scored on a wild pitch to knot the game at 1. The team would bat around in the 1st inning, sending their entire lineup to the plate. They would plate 4 on a multitude of hits and essentially the game was done after an inning.

Kelly Shackelford would help contribute to one of the more dominate wins in recent Lady Dragon Softball history. She allowed just two hits over 4 innings while striking out 6. And she combined with Lauren Long to hold a Mansfield offense that entered the Area round coming off a 23 run performance in the bi-district round, to one run on three hits.

After the four run explosion in the first the rest of the game was pretty window dressing for the Lady Dragons. Allie Nuenke clubbed the team's 6th home run of the playoffs and the game three hero vs. Flower Mound, Piper Harness, who was this week named the DFWVarsity Hitter of the Week, had an RBI single as well.

Shackelford picked up the win in the circle. She went 4 innings and as mentioned before allowed only a pair of hits. Lauren Long was very efficient in relief tossing 3 innings on 31 pitches.

SLC, 23-13, now leads the best 2 out of 3 series , 1-0 and heads to Mansfield on Friday, May 3rd looking to advance to the Region 1 quarterfinals for the first time under Head Coach Tim Stuewe. First pitch will be at 7:30pm at Mansfield HS.