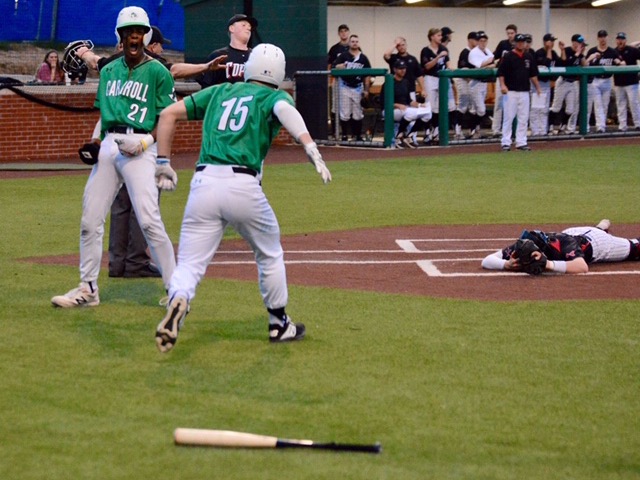 It is fitting that your defending State Champion's player intro music is the theme music from the Game of Thrones HBO TV series. Because Friday's series opener vs. Coppell felt like a joust between two teams worthy of a state title.

The Bi-District match up between the district 5-6A champions and the 6-6A four seed is a bit of a misnomer, as Coppell entered the pre-season as the state's #1 ranked team. They played like it early in this game, jumping out to a 2-0 lead in the top half of the first after Carroll ace Cutter Sippel had retired the first two hitters. Coppell used an error and a pair of doubles to leap out to the lead and hush the still arriving Carroll crowd.

Like the champions they are, Carroll countered with 2 runs in the bottom of the 1st on a pair of singles and a fortunate ground ball to third whose corresponding throw landed in the Carroll dugout and platted 2 runs. Coppell punched back with a solo homer in the top of the 2nd to lead 3-2. With two outs in the bottom of the 2nd Justin Grech said "OK Coppell - you can use the wind blowing out to left - so can I. I'll see your homer and match it to tie the game at 3." Coppell would land the next punch scoring 2 in the top of the 3rd to bolt out to a 5-3 lead. Carroll would instantly slash the deficit in half scoring a run to make the score 5-4 and giving the game the feel of one of those 1918 Yankees/ Red Sox games.

But then a funny thing happened. Each team's bullpens took over. Luke Gornell would settle the game down for SLC so too would Coppell's pen. When Coppell added an insurance run in the top of the 6th to make the game 6-4 it appeared they might be ready to steal home field advantage. But the Carroll offense would say - not so fast as they scored 2 in the bottom of the 6th to knot the game at 6-6.

Each team would then spend the next four innings in a shadow boxing match. Each team would have numerous threats only to see the other work out of it. Remember that in high school baseball a regulation game is 7 innings so an 11 inning game is some serious extra inning work. The Dragons thought they had won the game in the home half of the 10th on a single by Riley Garcia but the Coppell centerfielder made the defensive play of the year, tossing the winning run out at the plate and sending the game to the 11 inning.

At this point Head Coach Larry Vucan was forced to delve into his bullpen for a third time bringing in sophomore reliever Ryan Pehrson. If you have been following Dragon Baseball all year you know Ryan has an endearing nickname. He is referred to as The Vulture. This is a baseball term that means a reliever pitches for a short time and still picks up the win. Ryan worked an inning of spotless relieve in the top of the 11th and was the beneficiary of some serious heroics in the bottom of the 11th. Two straight singles open the inning and after one out was recorded Austin Hale stepped to the plate, lacing a deep fly ball toward left center. As the Coppell centerfielder sprinted and dove for the ball every eye in the place waited to see if he could make another defensive gem. Not this time - his dive came up just short allowing Homer Bush to sprint home with the 7th run of the game giving Carroll a 7-6 win and a 1-0 lead in the series. Now Carroll, 23-11, will have an early morning opportunity to close out the Cowboys.

Please note that both the game time and location have been changed. The game will now begin at 10am on Saturday, May 4th at Irving Nimitz High School.