LADY DRAGON SOFTBALL SWEEPS AWAY MANSFIELD - OFF TO REGIONAL QUARTERS 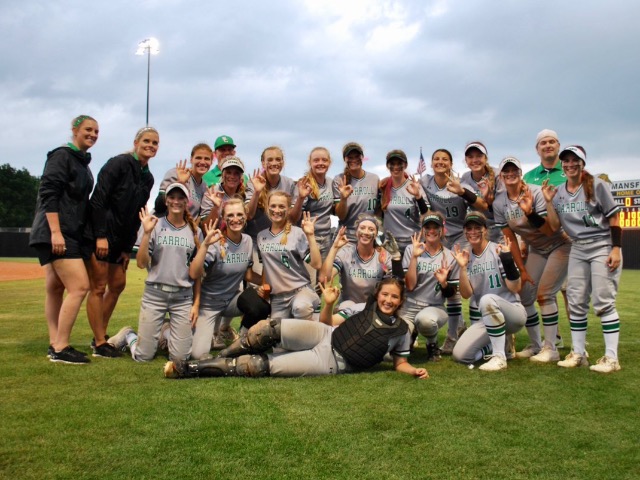 It takes something really special to bump an extra inning playoff game off the top line for a Friday in the Spring. The really special thing happed for Lady Dragon Softball today.

First the Lady Dragons were resilient just finding a place to play. The second game of the Area was originally scheduled at Mansfield at 7:30pm. But Mansfield has a grass field and due to the torrential rains that have fallen over the last few days everyone assumed that Mansfield's field would be unplayable. So the game was arranged to be moved to South Grand Prairie but then Mansfield's field was playable after all. Confused yet? So were the teams.

When the two teams finally stepped on the field at 4pm the proceedings got off to an instantly bumpy start for Lady Dragon Softball. Allie Nuenke drew the start and had a spot of trouble. She loaded the bases and surrendered a pair of runs while only recording one out. Carroll's head man Tim Stuewe quickly went to the bull pen for game 1 pitching hero Kelly Shackelford. In game 1 Shackelford allowed just 2 hits. She was better Friday allowing just one hit over 6 2/3 innings of relieve.

The Lady Dragon offense scored 1 in the first inning so after one inning the game sat at 2-1. After a scoreless 2nd inning the Lady Dragon offense scratched out another run to level the proceedings. The game was a tense 2-2 tie in the 5th when the skies opened, causing roughly a 30 minute rain delay. When the game resumed the Lady Dragons said we have waited 14 years to go to the Regional Quarterfinals - what difference does a little rain make - as they pushed across the game's final tally in the top of the 6th.

From there it was up to Shackelford to send the Lady Dragons into celebration mode.

Now the team is off to the Region 1 Quarters, thanks to their 3-2 victory, for the first team since some team members were 3 years old and also the first time under Head Coach Tim Stuewe.

The team, 23-13 will now draw Keller sometime next week at a site and time to be determined.