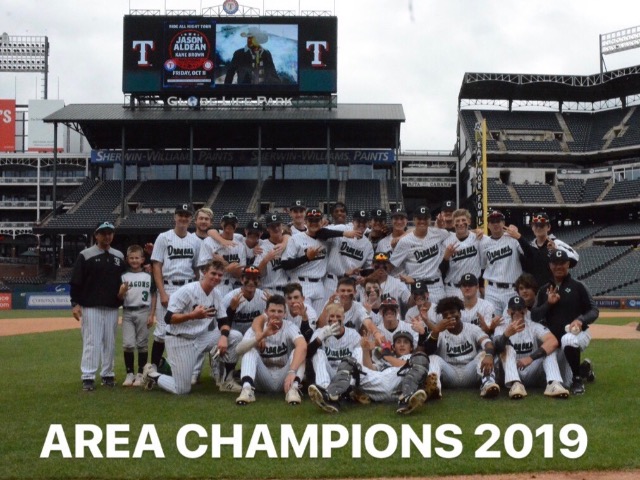 The field in Arlington has gone by many different names - The Ballpark in Arlington - Ameriquest Field - and now Globe Life Park. But almost never in its 25 year history has it seen as dominant a two game stretch as the high school kids from Southlake put on this weekend. In a brief two game series the Dragons outscored JJ Pearce 23-3 or by an even 20 runs. (Remember the Mustangs entered the series red hot offensively having set a record for most runs in a single inning in UIL history.) Red hot Pearce offense met stellar SLC pitching.

Cutter Sippel, Joe Steeber and Luke Gornell combined to allow just one earned run in the entire series. Sippel picked up the win in game 1, which was his 9th on the season. Luke Gornell entered in the 4th inning today in relieve with the game tied at 2 and the Mustangs making their lone push to make it a series. Gornell, 3-2, pitched out of a two man on, one out jam in the 4th and then let his offensive teammates explode for 7 runs on 7 hits in the bottom of the 4th to clinch SLC's spot in the Region 1 Quarterfinals.

The Dragon offense was remarkably consistent on the day pounding 14 hits and 12 runs. Cade Manning led the offense with 3 hits going 3 for 3 while Yanluis Ortiz and Justin Grech each had doubles. Grant Golomb had 3 RBIs as Carroll, 26-11 pounded their way to a run rule victory in the abbreviated 10 run rule 12-2 game.

All these offensive fireworks set up a re-match of last year's Region 1 final. The Dragons will now prepare to take on Flower Mound Marcus at a site and time to be determined.

A famous movie once said "If you build it they will come." This group of Dragons came to the ballpark in its final days and put on a show. Thank you for the memories Dragon Baseball - it was one heck of a weekend. And thank you for 25 grand years to The Ballpark in Arlington or Globe Life Park as it is known today. We salute you and thank for being this group of Dragons field of dreams.