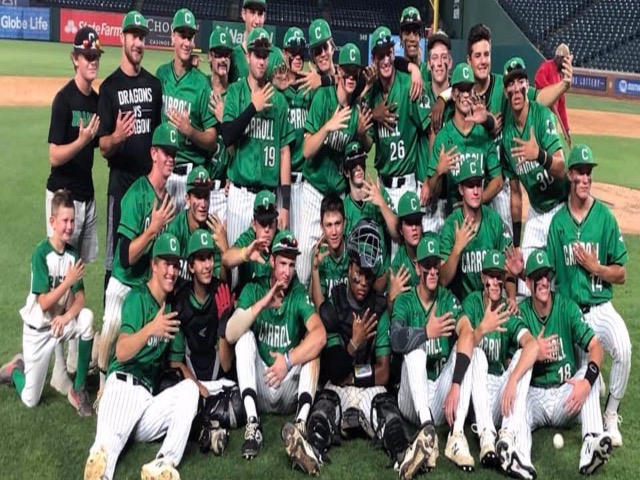 Teams that have won 14 consecutive games dating back to the regular season and double digit playoff games in a row don't often find themselves backed into a corner. But when Odessa High School won a coin flip for a one game playoff this week, and two regulars would be missing from the lineup for various circumstances, you can excuse Carroll fans for feeling a little uncomfortable going into the game at Globe Life Park tonight.

But Cutter Sippel, 11-1, was as good as he's ever been in his two year career as a varsity starter. His career record in two years now improves to 21-1. Let me repeat that - 21-1. Division one schools - are you paying attention?

The Carroll offense used a death by a thousand paper cuts strategy as they pounded out eight hits in a six run attack. Yanluis Ortiz had two hits, the first a double to lead off the game which bounced over the right field fence after hitting on the warning track. He then had an RBI single in the 3rd inning. Brandon Howell also had a multiple hit evening as the Dragons overwhelmed the Bronchos from pitch one in the 6-0 shutout. They held the red hot Odessa High squad to just 3 hits as after Sippel worked 6 2/3 innings, while K-ing seven, Joe Steeber threw one pitch for the game's final out.

The Dragons picked up their 29th win against 11 defeats. Remember only three of those 11 have come against in-state opponents. SLC will next play Flower Mound in the Region 1 championship series. It is the 3rd straight year that the team has reached the Elite 8 as they did so in both 2017 and 2018. Each of the preceding years they have reached the state tournament. The team is also 3-0 all time at Globe Life Park.