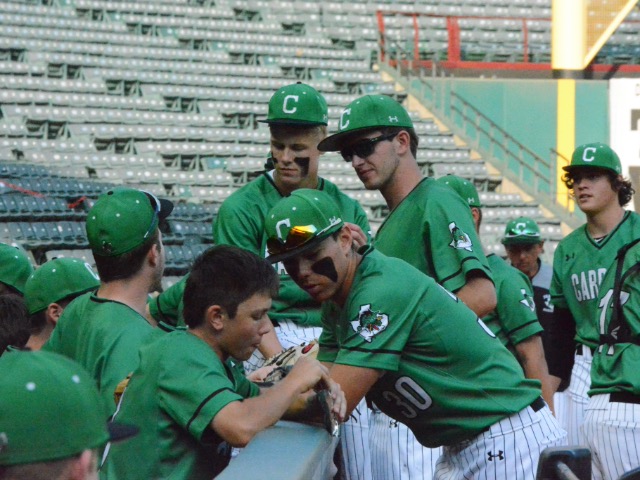 The Region 1 final will traverse the Metroplex this week beginning with a game on Thursday , May 30th at TCU's Lupton Stadium at 7:30pm vs. Flower Mound. Game 2 will be at DBU's Horner Ballpark on Friday, May 31st at 7:30pm and game 3 if necessary will be at Dr. Pepper Ballpark in Frisco on Saturday, June 1st at either 11:30am or noon.

The following information is good for all games. Ticket prices are $10.00. There is no parking fee but there is a clear bag policy in effect.

The Region 1 final series will be the 3rd and 4th time the two teams have met this year. They split a pair of games in early February with each team winning at home. Flower Mound won 2-0 in the team's first meeting the second week of the year while Carroll won on a walk off at a game hosted at Bicentennial Park a week later. Flower Mound will enter the series with a 32-12 mark while Carroll will be looking for its 30th victory in game 1 as they enter at 29-11. It will be the second time the two teams have met in a regional final. Flower Mound won a three game series in route to the 2014 state championship.

All games of the series can be heard online by listening at DragonSportsNetwork.com or by downloading the Dragon Sports App from the App Store of your choice. Chuck Kelly will be on the call.

We look forward to a great weekend of Dragon Baseball in this Region 1 final.