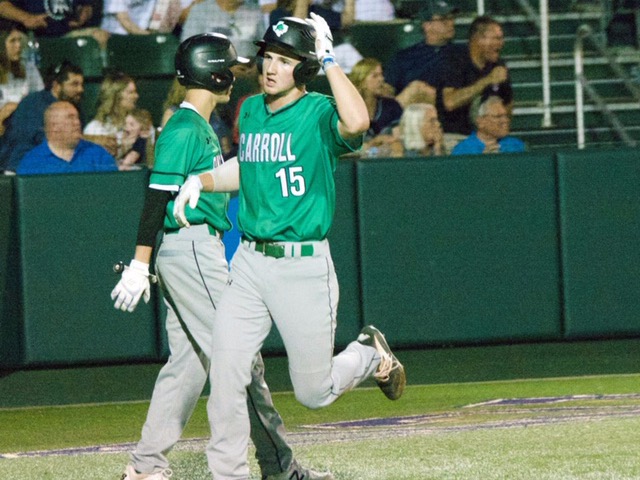 It is appropriate that the NCAA Baseball Division 1 regionals begin tomorrow because the game played at TCU's Lupton Stadium tonight had every bit the feel of a game on the road to Omaha. Instead, the Dragons, are now one win away from Austin (if you want to get really technical it is really Round Rock - but that's not the point.)

The Dragons, 30-11, moved to the doorstep of state, thanks to a total team effort tonight playing in the Region 1 final vs. Flower Mound. Senior pitcher Cutter Sippel drew the game 1 start and picked up his 12th consecutive victory since a February loss to well, Flower Mound. Sippel has reeled off 12 consecutive victories. In fact the February decision against the Jaguars has been the senior's only career setback sandwiched around 22 Ws.

Tonight took every bit of everyone for the team to pick up the win. The Dragons took a 1-0 lead in the top half of the first on two walks, a single, and a wild pitch. The lead would grow to 3-0 in the 3rd on two RBI singles by Riley Garcia and Grant Golomb. At this point every Carroll fan was feeling pretty comfy in the nice seats at Lupton. We had a 3-0 lead and Cutter on the mound. But that just isn't the way Carroll vs. Flower Mound in the Region final works. Following a seemingly harmless single, with two outs, and a hit by pitch, Flower Mound starting pitcher Cam Brown belted a home run over the right-field fence. We will revisit that right field fence later. Brown's home run ball was the first allowed by Sippel this year and after 3 innings threes were wild. The game would remain tied until Carroll scored two in the 5th on an RBI single by Riley Garcia and another one by the returning Jaxon Osterberg, who missed last week's one game playoff vs. Odessa. But one more time the Jags would respond instantly with 2 runs in the bottom of the 5th. Every time the Dragons would seem to have the game put away right back would come the Jags until the top of the 6th. The inning began with a ground ball to 2nd by Yanluis Ortiz which handcuffed the Jags second baseman. Austin Hale squared to bunt and laid down the bunt of his life and reached on a single. At this point the Jags went to the bullpen and head man Larry Vucan had a decision to make. Every one in the ball park was surprised when Brandon Howell didn't square to bunt. Instead he worked the count to 3-2, fouled off about 14 pitches and then swung - sending the ball over the right field fence. Told you we would see that right field fence again. The ball cleared with plenty of room to spare for a 3 run bomb. This was Howell's 4th of the year, which leads the ball club.

Sippel would finish the game in the bottom half of the 7th for the 8-5 win. And now the Dragons will look to close out the Jaguars tomorrow when the series shifts to DBU's Horner Ballpark at 7:30pm.