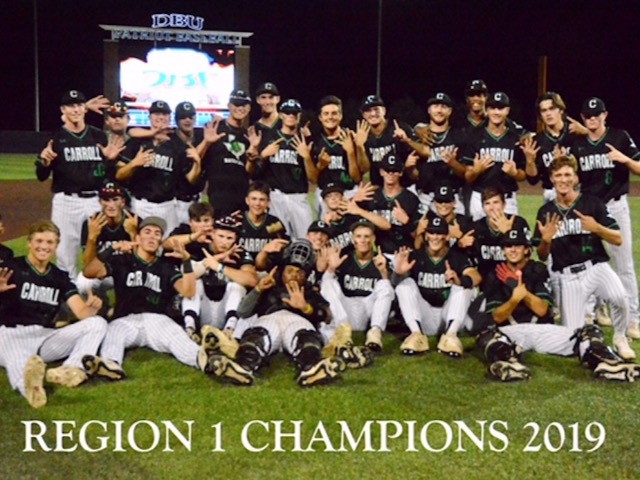 For years ESPN introduced its College World Series coverage with the theme song "Back Home in Omaha." For three years now, under third year Head Coach Larry Vucan, your Carroll Dragon Baseball team can change that to Back Home in Round Rock. They are headed to their third consecutive UIL State Tournament and 10th in school history.

There is also a rather impressive playoff winning streak that just keeps growing. The Dragons have now won 20 consecutive playoff games dating back to the 2017 UIL state semi-final.

For the longest time it didn't look like the streak would be added to tonight at DBU's Horner Ballpark as your Dragons fell behind 4-0 to the Jaguars with some very uncharacteristic plays. Flower Mound scored 4 runs off only 1 hit in the top of the 2nd while the Dragon defense committed three errors. Keep in mind that trailing 4-0 the Dragon offense was facing a University of Texas bound pitcher in Austin Wallace. But unlike 2014 when SLC couldn't hold a 4-0 lead against Texas signee Kyle Johnson in game one of the Regional final, tonight the Dragon offense stormed back.

After leaving the bases loaded in the bottom of the 2nd the Dragon offense loaded them again in the bottom of the 3rd. Wallace appeared to have worked his way out of the jam for the second consecutive inning when Riley Garcia hit a bouncing ball toward second base. Every Dragon fan in the universe had to be thinking oh no not again when the throw that would have gotten the Jags out of trouble bounded into the Flower Mound dugout. Two runs were plated on the errant throw and the lead was cut in half. Center fielder Jaxon Osterberg was next to the plate with runners on second and third. Osterberg was a steady stick to have at the plate. He would not have to swing the bat however for Carroll to tie the game. Wallace uncorked a one ball, two strike wild pitch which plated one run from third which would have cut the deficit to 4-3. However the Flower Mound catcher got over zealous and tried to toss out the Carroll runner at the plate. The throw again rolled back toward the Flower Mound dugout and BAM the game was tied at 4. Osterberg struck out to end the inning but after a crazy three innings game two was knotted at 4.

At this point Luke Gornell had relieved a struggling Joe Steeber an inning before. Gornell was busy keeping the Dragons in the game so they could mount this comeback. Sophomore Gornell picked up his 4th and obviously largest win of the year against two defeats. He tossed 5 innings while striking out 5.

The Jags would take one final lead in their 2019 season on another home run by Cam Brown to lead 5-4 after 4 1/2 innings. But the Dragon offense would step up again. After the inning began with a pair of baserunners, Grant Golomb, who had his defensive struggles earlier in the game, would atone with an RBI single to tie the game at 5. The Jags would go to the bullpen but up would step Garcia again. Lacing a ball toward the right center field gap would split the Jag outfielders for a 2 run triple which gave the big green machine a 7-5 lead. The final run would score on of all things - a balk - for the final 8-5 margin. An identical twin victory to last night's 8-5 win.

The win is Carroll's 31st which equals the number of victories for the 2002 state championship team who finished 31-10. Carroll will enter the UIL State Tournament with a mark of 31-11. Seedings and times for the state tournament will be announced later this weekend.