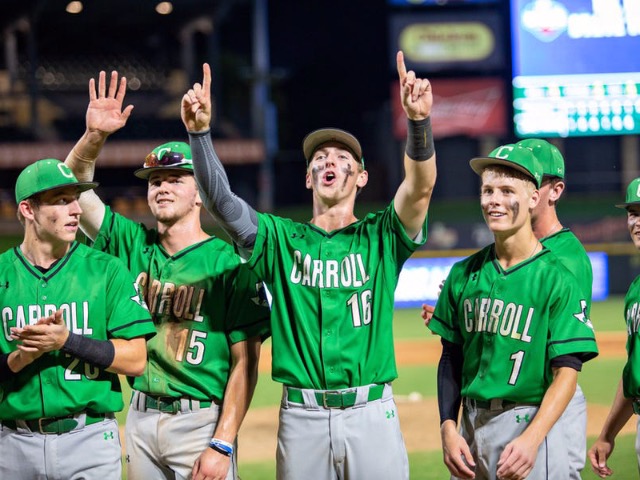 If this season of Carroll Dragon Baseball was submitted as a Hollywood script the would be producer would send it back. Nay, this scripts is too cheesy. A player who has been out for two weeks without a single at bat comes back from a broken bone and goes 0-2 until the bases are loaded in the top of the 7th and then rips a single to center field to win the game? No - that couldn't even happen in a Disney movie. But oh wait it actually did happen.

Justin Grech, who dealt the deciding blow to Lake Travis tonight in the Class 6A State Semi-final, had been out since game two of the Region 1 Quarterfinal vs. Flower Mound Marcus. He broke a bone in his hand. His first game returning to the lineup was tonight's semi-final victory over Lake Travis. And oh yea the pitcher who he got the game winning hit off of - he was just selected #12 overall in Monday's MLB draft by the New York Mets.

But that all happened after some pretty unbelievable stuff to set the stage. If you had drawn up the book on how to win this game it would have said jump out to a huge lead early to knock Lake Travis' starting pitcher and his .624 batting average figuratively out of the game. And indeed SLC had the chance to do that early after scoring a run in the 1st and loading the bases with only one out, but Baty got back to back strike outs to close the inning. Lake Travis countered with a run of their own in the bottom of the first and then the score stayed the same until Lake Travis scored in the bottom half of the 5th. At this point Carroll's 20 game playoff winning streak was six outs away from being over before a huge red clad throng of Lake Travis fans. Let's be clear there was nothing neutral about this "neutral site."

Grech's huge night would begin in the visiting 6th inning. He hit a seemingly harmless ground ball toward the Lake Travis shortstop but Grech was flying down the first base line which gave the shortstop the illusion that he had to rush the throw. He hurried it and bounced the ball at the feet of the Lake Travis first baseman. It skittered away down the line allowing Grech to reach and setting the stage for Carroll's comeback.

Yanluis Ortiz then stepped in and ripped his second double of the night. He had earlier doubled to set the stage for Carroll's first run. Grech then scored on a sacrifice fly by Austin Hale. The game was tied at 2 apiece heading to the bottom of the 6th. Luke Gornell, 5-2, had earlier relieved Carroll's starter Cutter Sippel who will finish the year with a 12-1 mark.

Lake Travis began the bottom of the 6th inning with a lead off single. Gornell got the next hitter to strike out which rolled the line up to the top of Lake Travis' order. Which is where the aforementioned Baty was waiting. He had been intentionally walked three previous times on the night. So conventional wisdom says he walks again and we move on. But oh my gosh, is Yanluis squatting down? Are we actually pitching to the state's home run leader with 20? With the whole season on the line? But then again this is a decision made by the coach who has won 20 consecutive playoff games. So why are we nervous? After fouling off like a season's worth of pitches - all with a 3-2 count - Gornell induced a fly ball toward the left center field gap. All of Lake Travis stood up thinking their hero had just hit a three run homer. But they hadn't read the script. Carroll's centerfielder Jaxon Osterberg raced to the gap and made the catch. And then Carroll busted the game open with four runs in the top of the 7th, scoring on the previously mentioned RBI single by Grech, another single by Ortiz and a fielder's choice.

The final score of 6-2 was way more comfortable than this game ever felt. The win moves Carroll to 32-11 on the year and to the State Championship game for the 2nd consecutive year and 6th in school history. They will face Fort Bend Ridge Point at 4pm Saturday, June 8th at Dell Diamond.

The State Championship game will be televised on Fox Sports Southwest live.