DRAGONS TIE ALL TIME RECORD FOR POINTS IN PLAYOFF OPENER 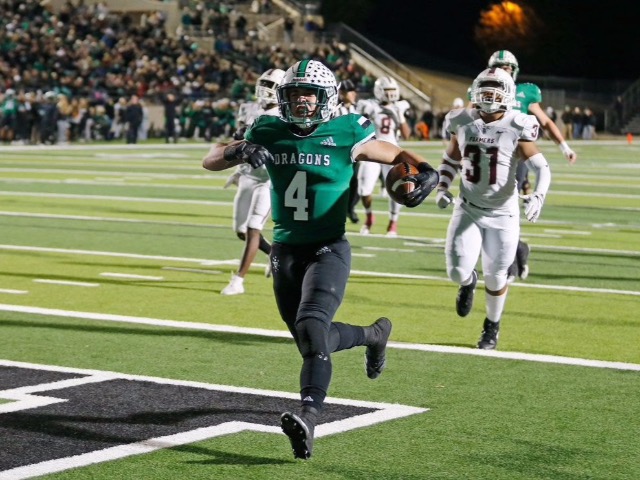 Where you there tonight to witness Carroll Football recording history? Carroll Football put on a first half tonight that had the media members in the press box doing some fancy scrambling of their own. They were all scrambling through the state's all time record books to look up most points ever scored by the Dragons in a first half. Tonight's 63 first half points was the all time record and the 84 final for the game tied the all time mark with a regular season game from 1988.

The Dragon offense rolled up 693 total yards and scored a whooping 12 touchdowns tonight in the bi-district round of the playoffs. The offense was so efficient they resembled that old Oprah Winfrey line as in 'you get a touchdown - you get a touchdown' on their way to an 84-6 victory over Lewisville.

Four of the twelve touchdowns were scored by freshman running back Owen Allen who did not begin the season on the team's varsity roster. Another touchdown was accounted for by back up quarterback Hunter Holden who was making his first varsity appearance. A pair came from wide receiver #5 Wills Meyer. The play that the Fighting Farmers could not stop all night was Carroll's bubble screen. Brady Body ended this playoff game 17 seconds into it with a metaphorical punch, taking a bubble screen to the house for 66 yards on the game's first offensive play.

Oh yes and more touchdown goodness - RJ Mickens, who had not played a play on offense yet this season entered the game and took, guess what, a bubble screen to the house for 67 yards. John Manero sprinkled in a 12 yard touchdown reception because #80 couldn't be left out of the fun. And a pair came from two of Carroll's reserve running backs - senior Cade Wood took a house call for 41 yards and Jack Abrams who was returning to the lineup for the first time since Odessa Permian in week three visited the end zone on a 58 yard gallop.

The Dragon defense was stellar on the night, holding a squad that scored nearly 50 points in an overtime loss to Marcus last week, to just 6 points tonight, and only 49 yards rushing on the ground.

I guess blondes really do have more fun.