DRAGONS MAKE HISTORY. BACK UP '18'S TITLE WITH ANOTHER. 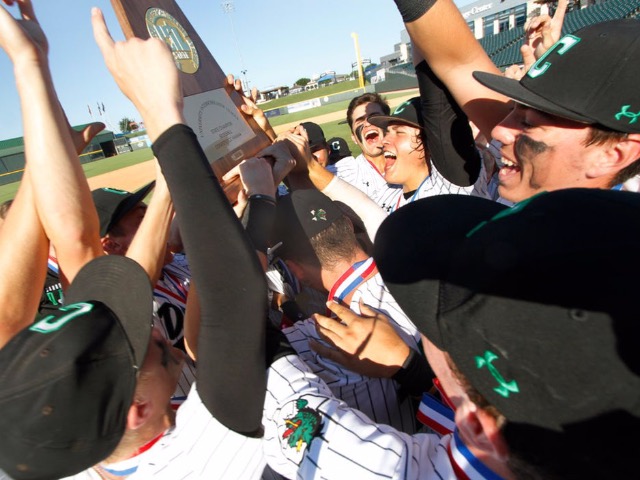 Your Social Media Man has been privileged to be a part of the Southlake Carroll Athletic program as a student and employee in one way or the other since 1998. There have been three great dynasties role through the SLC in that time period, Football under Todd Dodge, Swimming under Kevin Murphy and as of today Baseball under Larry Vucan.

Dragon Baseball became the first ever repeat champions at the 6A level and the first repeat champions at the highest classification since 2002-2003. They did so with a state championship game - that put in the kindest way possible - was not close. The Dragons overwhelmed the Fort Bend Ridge Point Panthers with four runs in the top half of the 1st inning. The game began on back-to-back singles by Yanluis Ortiz and Austin Hale. An error allowed the first run to score which was Homer Bush pinch running for Ortiz. That would be no where near the last time that SLC would use a Ridge Point error to score as they shutout the Panthers 17-0.

After the four run 1st, Ridge Point actually mounted an instant threat to tie the game. They lead off the inning with a single and following a pop out used an error on an all but certain double play ball to load the bases. This seemed like it was a tense moment. But Carroll's starter Joe Steeber, 5-2, rallied for back-to-back Ks to end the threat. It would be Ridge Point's only threat of the day. Carroll was held off the board in the 2nd and after Steeber put up a zero in the top half of the 3rd, as Carroll was the home team, the Dragons loaded the bases again, with nobody out. The next Carroll batter was retired and the bases were loaded with one down. What followed for the next 50 minutes would set UIL history as the Dragons would plate 11 runs in the inning. If there was a way to score in a baseball inning Carroll did so. State tournament MVP Justin Grech began the onslaught with a two run single. He also would contribute a sacrifice fly. Thomas Wrehe walked and got hit by a pitch - no that's not his line for the day - just the third inning. Austin Hale singled in a run as the Dragons used three Ridge Point errors, six free passes, two HBPs and a pair of wild pitches combined for eleven runs in a state championship Pear Tree.

The offense was led by multiple hit days from Cade Manning (3), Brandon Howell (2) and Riley Garcia (2). In a year that has been dominated on the hill by Cutter Sippel's outstanding season, the last three victories came from others, a pair by Luke Gornell and today's strong performance by Steeber who tossed 5 innings while scattering four hits and striking out five. Carroll will return three starters next year with five wins apiece.

The Dragons will finish this season with a 33-11 mark and become the first pair of baseball teams in school history to repeat. The team earned its fourth State Title in ten state tournament appearances. When they open the playoffs next year they will carry a 22 game playoff winning streak into the bi-district round.

It is impossible to fit into a single story all the amazing things that happened this season but here goes. The Dragons, remember, started the season 1-6 with no returning starters from a team that lost 20 seniors. After that 1-6 start nobody was saying the word repeat. The team went 32-5 after the slow start to achieve the 33-11 overall record. So many people stepped up to fill key roles on this team that if you listed them all we would just be listing the roster. The beauty of this team was that the nine starters, whoever they were on a given night, could beat anyone's super stars. And this group will forever be known as The History Makers, the group who cemented the second of the back to back titles. It is impossible at Southlake Carroll to do something that has never been done before but this group of Dragons did.

Thank you to all who made this season so special. Your historic season can and will never be forgotten. Your are champions forever.